There's been a lot of interest in alternate ukulele tunings lately so I wanted to share my favourite alternate tuning with you.

This is a baritone tuning but if you stick around to the end of the video I'll show you how to apply it to standard C tuning as well. I call this BEBE tuning and I stumbled on it around the time my son was born but that's not why it's called "BEBE" tuning. It's called BEBE tuning because the open strings are tuned B-E-B-E!

Here's how it works. No special strings or string replacement needed. Just start with a baritone uke in DGBE tuning. I always play baritone in re-entrant or high-D tuning because I like the sound. Some people call this the "Lyle Ritz" tuning because it really suited his Lyle's jazzy sound and he used it a lot. Benny Chong and Byron Yasui are also fans of this tuning. I don't know how this will sound in Low-D baritone tuning but I think it will still work.

Strum all four strings and you get this resonant, lonesome-sounding chord.

Here we go. You don't do anything to the two strings closest to the floor. They stay as-is. But tune the D string (that's the one closest to your nose) down to a B.  It should be the same note as the 2nd string so if you play them together they should sound identical.  Now tune the G down to E. This string should now be the same note as the first string, just an octave lower.  Strum all four strings and you get this open, resonant and kind of lonesome-sounding chord.  Notice there are four strings but only two notes.  B and E.  In the fiddle world this is what they'd call a "cross tuning."

Now just start putting your fingers down on frets and see what happens!  If you like the sound, remember it and do it again.  This is what I love about alternate tunings: it puts you back in the beginner's mind.  It jolts you out of those well-worn fretboard habits.  It's like putting on a blindfold and trying to walking around your house; you hear and feel in a whole new way. 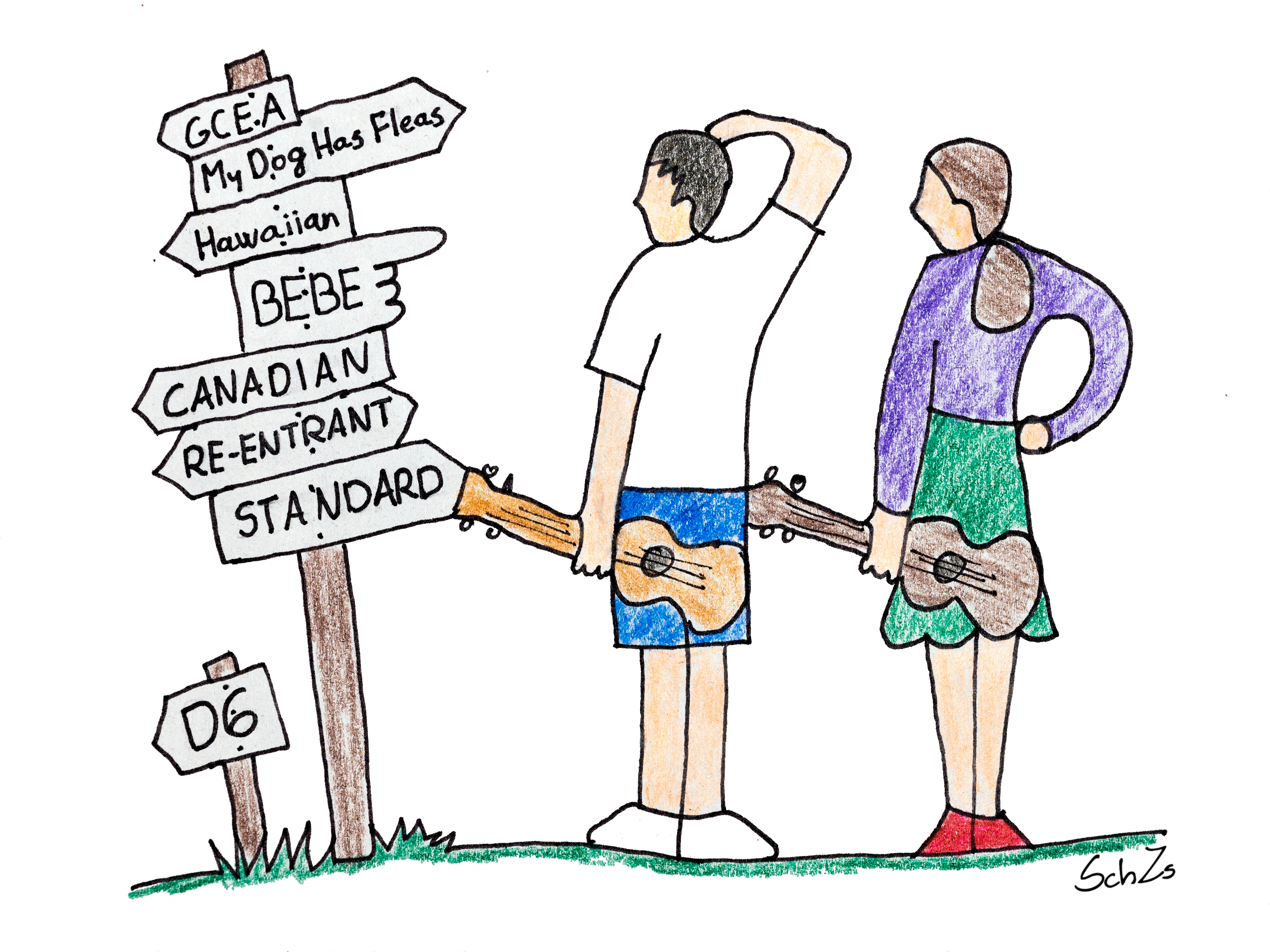 The first thing I do if I really want to learn a new tuning is try to find "families" of chords.  Usually a I, IV and a V (or in non-technical terms, a chord that feels like "home" chord, a chord that feels like "away" and a chord that feels like somewhere in-between!).  That way I can start to use my new tuning on songs I already know.  So let me show you a basic family of chords in BEBE tuning. It's really easy to get started. To play an E chord, just strum all the open strings.  Done!  Now put a finger on the third string, second fret. Just like that you have a sort-of B chord. Simple. Now keep moving up that string to the 5th fret.  This gives you a sort-of A chord, the IV chord.  Also really lovely-sounding. That's it!  These last two aren't aren't vanilla chords, either, they have some nice bonus notes in them which make them sound "expensive." See if you can use these three chords in a simple three-chord song you already know (e.g. Happy Birthday, You Are My Sunshine or My Bonnie Lies Over the Ocean).

This is what I love about alternate tunings: it puts you back in the beginner's mind.  It jolts you out of those well-worn fretboard habits.

That's really just the tip of the iceberg and I can't resist showing you one bonus variation on each of those chords!  To play a slightly fancier version of E, just add one finger on the first string, 4th fret. It's still an E chord but it sounds a little brighter and more sparkling.  Now a slightly-fancier A chord: just add one finger. Add the 5th fret on the 2nd string. So you're fretting the two middle strings at the 5th fret and the outer strings are open.  Now, to play a different version of B, slide this shape UP two frets and bingo, you have an alternate version of B.  And here's an amazing bonus: keep going two frets higher and you'll get the vi chord, C-sharp minor, which is just a heartbreaking sound and so easy to play.  (Watch the video to see and hear how this applies to My Bonnie Lies Over the Ocean).

Now you have two versions of E, two versions of A and two versions of B to work with.  You can mix and match them and have a ton of fun.  So you can see why I fell in love with this tuning. It works beautifully in gentle, melodic songs but it also works really well in heavier, blues-ier stuff as well.  And that mostly where I've used this tuning.  Songs like Promenade, Tie One One and She's Still Got it from my album The Old Silo.  So check those out if you want to hear this tuning in action.

You can see why I fell in love with this tuning. It works beautifully in gentle, melodic songs but it also works really well in heavier, blues-ier stuff as well.

So I just want to finish by showing you what it sounds like when you really crank this tuning up and add a bit of drive.  Today I just grabbed a little roland mini-cube amp and I figure if it sounds killer through this little thing it will sound amazing on just about anything.  My favourite trick when I'm plugged and turned up in is to play the same note on the 2nd and 4th strings and bend one slightly so the notes fight against each other.  It really makes the uke growl.  (Watch the video to hear what BEBE sounds like when you turn it up to 11!).

Special thanks to Zsolt Schäfer for the delightful cartoon above.

James Hill is the founder of Uketropolis and author of several ukulele learning methods including Ready, Steady, Ukulele! (the $1 course for absolute beginners), BOOSTER UKE and The Ukulele Way.

Top Ten Reasons To Love Online Teaching Jan 18, 2022
Why Improving Your Playing is the Most Enjoyable Way to Improve Your Teaching Dec 20, 2021
Holiday Helpers! Musical activities for in-class or at-home Dec 07, 2021
Close