How to Lead a Great Ukulele Jam 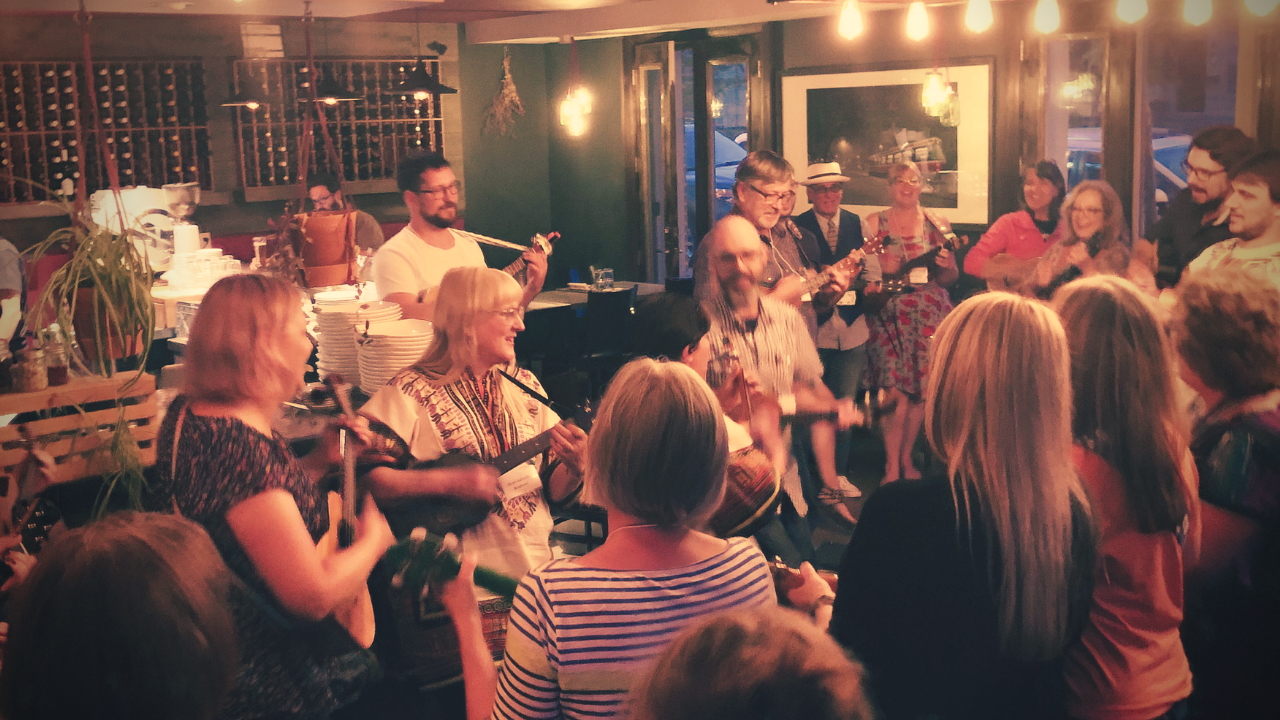 Though this From the Vault post is from December 2011—nearly ten years ago—the basics of how to effectively lead a jam still apply! As we slowly begin to see opportunities to get back together in person, or even if we continue with virtual jams, it's a good time to refresh our skills for leading and participating. Let's go!

As the popularity of the ukulele grows, so does the number of ukulele groups and jam sessions. How to make yours better than average? In this article, ukulele teacher Jim D'Ville shares practical tips that every jammer and jam leader should know!

Get the group in tune If you want your jam session to sound good from the very first note, get the group in tune. Have everyone tune-up their ukuleles, then have the group tune their ears and voices. I use an A-440 tuning fork to accomplish this (since the first string on the ukulele in C tuning is tuned to A). Strike the A fork on your knee and place it on your uke. Hum the resulting A tone. Get the group to join the hum fest. At this point you can introduce the concept of playing together in time. Strike the fork again, place it on your uke and count off 3-4-1 (4/4 time-four beats per measure). On the 1, get everyone to loudly sing: "AAAAAAAAAAAA!" In a group setting, this usually comes out sounding pretty good.

You have now introduced the concept of singing on pitch. Have you ever seen a barbershop quartet perform? Before each song starts the leader of the group states the key by blowing the root note on a chromatic pitch pipe. You can perform the same task at your jam. Before each song, state the key of the song, play the tonic or root note of that key and have the group sing it. Repeating this procedure with each song will dramatically improve the over-all tonality of your jam.

All jams run smoother when the players use the number system to call out chords. The key you choose to play the song is assigned the number I. All the other notes of the scale are numbered in order. In the key of C it would look like this. C=I, D=II, E=III, F=IV, G=V, A=VI, B=VII. In the key of Ab, for example, it's much easier for the jam leader to call out "I-V-I" than to call out the letters "Ab-Eb-Ab." By getting used to using the numbers instead of the letters you'll also have a much easier time transposing songs into different keys.

Choose songs with simple chord progressions that people can easily memorize. I'll oftentimes start a jam session with a one-chord song like Harry Nilsson's Lime in the Coconut in C or War's Low Rider in G (using a G7 chord) which eliminates the need of memorizing a chord progression entirely. This allows the players to concentrate on listening to (and strumming) the melody and rhythm of the words, which in turn, helps break the robotic monotony of the strumming heard at most ukulele jam sessions.

Teach the songs to the group in a musical fashion. That means not using sheet music handouts. If people are reading off a piece of paper they are not fully engaged in the act of listening, they are multi-tasking, i.e reading, strumming, singing, etc. Tell the group the key of the song and the chord progression. Have the group sing the root note of the key (as stated above). Count it off and play it for the group so they get the sound of it in their ears. Start with fun I-V7-I (C-G7-C) songs like Jambalaya or Take Me Back To Tulsa. Most people already know how these tunes go and can sing the chorus without looking at any music.

One reason people develop a reliance on using sheet music is they are not taught how to listen for the chord changes to simple songs. With a little ear-training most everyone can hear the I-V7-I relationship. Collect as many fun and familiar songs that use this song form to bolster your jam song repertoire. Genres to search for easy two-chord songs include rock, pop, folk, old time, bluegrass, and reggae.

Move up to three chords

Once the jammers are comfortable with the one and two-chord song form, move up to the most popular song form of all time, songs that use the I-IV and V7 chords (e.g. C-F-G7). We have been listening to these three chords (in different keys) and all their chord progression permutations since we began hearing music. Our ears are very familiar with it. I prove this to people by having them play the I-IV-V7-I progression for one measure on each chord. In moments, everyone is playing the progression without looking at any music. This is where the magic takes place. I start singing Jamaica Farewell, or Do Ron Ron, or King of the Road, or any number of other tunes with this progression and the jammers realize they weren't just playing a chord progression, but the chord progression to actual songs! Also, their singing improves because they are not reading, but listening. There is an endless supply of songs that contain the I-IV & V7 (or V) chords. Another great type of song for getting folks off the paper in a jam setting is a song in which the chord progression for the verse and chorus are the same as in The Lion Sleeps Tonight.

The 3-chord song form is very flexible. You aren't limited to using just the I-IV and V7 chords. One of my favorite three-chord progressions is the I-ii-IV (e.g. C - Dm - F) which is found in Bobby McFerrin's Don't Worry, Be Happyand Bob Dylan's You Ain't Goin' Nowhere. Another fun song to sing that is slightly outside the I-IV-V7 box is The Rolling Stones' You Can't Always Get What You Want. The entire song moves between the I and the IV chords until that wonderful moment in the chorus when the II (D major in the key of C) makes a brief – but stunning – appearance. I won't tell you exactly where that chord change occurs, I'll let you play the song for yourself and let your ears tell you where the II falls. I guarantee you will never forget how the chord progression sounds, or have to look at a piece of sheet music to remember how it goes. That's the beauty of learning and teaching songs in this fashion.

A call-and-response tune is guaranteed to spice up any jam session. As the leader of the group you are the "caller," which means you sing the lyrics to which the group will respond. This type of song requires that only the jam leader know the lyrics which, once again, eliminates the need to hand out any sheet music. Gary U.S. Bonds' hit New Orleans is a call-and-response tune I use all the time. It starts out with the lyrics, "I said a Hey, Hey, Hey, Hey-Hey." And the jammers reply with "Hey, Hey, Hey, Hey-Hey." There is also a sax riff in the song that you can get folks to sing that goes, "Da-da-da-duh, duh, duh, da-da-duh."

The 12-Bar Blues song form is a jam session treasure trove containing millions upon millions of songs encompassing far more than simply blues tunes. The 12-bar blues form was co-opted by the early rock 'n roll songwriters who penned such classics as Kansas City, Rock Around The Clock, Johnny B. Goode, The Wanderer, Blue Suede Shoes and others too numerous to count.

One of the most effective tools to breaking the monotony of the standard ukulele jam is by not playing. By that I mean inserting rests (i.e. moments of silence) in the songs.

It's easy to create simple arrangements of your jam tunes by suggesting to the group a good place for everyone to stop at the same time and where to start playing again. One example can be found at the end of the verse going into the chorus of Jambalaya. "Son of a gun, we'll have big fun, on the ONE-TWO-THREE-FOUR-REST! Jambalaya and crawfish pie" etc.

Another idea for arranging a song might be for everyone to strum exactly the same rhythm for a particular measure or two. Or, add dynamics: have everyone sing/play a certain verse very quietly, for example. Be creative and let others in the group "add their stamp" to the arrangement. The possibilities are endless.

Get some harmony going

Adding harmony singing into the group dynamic elevates the jam to a new level of excitement and enjoyment. Start simple by breaking the group into three sections. Assign each section a note of the C chord to sing (C-E-G). Use the solfege syllables (C=Do, E=Mi, G=Sol). You'll be amazed at the sound! Repeat the exercise with the IV and V chords. Before you know it, your group will know what it sounds like to sing a 3rd and a 5th above the root of a chord. Also take advantage of the fact that men's and women's voices sound different. Use this fact when you are creating your arrangement of a singing song. For example having only the men or women sing during a specific section of the song.

We play songs in different keys to accommodate the vocal ranges of the people singing. Another reason to transpose songs to different keys is so the group is not playing every song in the key of C. It's fairly easy to move two and three chord songs quickly into other popular keys like A, G, D, & F especially if you teach the group to use the numbers (e.g. I-V7-I) instead of the letter names for the chords (e.g. A-E7-A) as mentioned earlier. Put some thought into the songs you choose for your jam and the order in which you play them, much like a performer creates a set list for a gig. Mixing up the keys and tempos will add much-needed diversity to your jam repertoire.

The best thing about a ukulele jam is everyone gets to participate! Even if the chords to the songs range out of the comfort zone of a player, there are still things that person can do to contribute. In a multiple ukulele setting percussion is always needed. That's where the International Mute Chord (IMC) comes into play. Simply by damping (lightly touching the strings with all the fingers of the fretting hand) you can create a great percussion back-up if you don't know the chords to the song. Singing harmony, as mentioned above, is another way to contribute if you don't know the chords. The back of the uke also makes for a great drum. Find a space in the music and make it your own.

Jim D’Ville is a ukulele teacher and performer based in New Mexico. You can find him online here.