Seven Point Guide to Why You Should Play the Ukulele 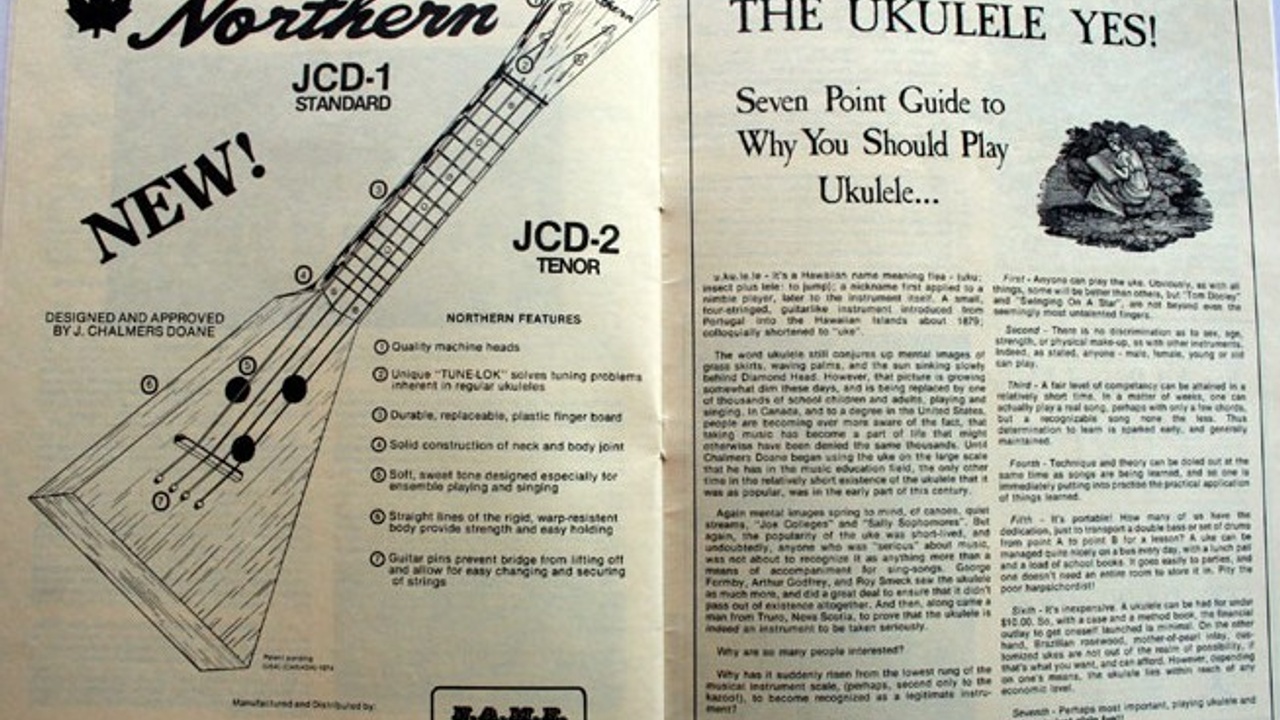 The more things change, the more they stay the same, except perhaps the price of ukuleles! This month's From the Vault is a true throwback to the original Ukulele Yes! print magazine, with an article from the very first issue in 1976.

u.ku.le.le - It's a Hawaiian name meaning flea - (uku; insect plus lele: to jump); a nickname first applied to a nimble player, later to the instrument itself. A small, four-stringed, guitar-like instrument introduced from Portugal into the Hawaiian Islands about 1879; colloquially shortened to "uke".

The word ukulele still conjures up mental images of grass skirts, waving palms, and the sun sinking slowly behind Diamond Head. However, that picture is growing somewhat dim these days, and is being replaced by one of thousands of school children and adults, playing and singing. In Canada, and to a degree in the United States, people are becoming ever more aware of the fact, that taking music has become a part of life that might otherwise have been denied the same thousands. Until Chalmers Doane began using the uke on the large scale that he has in the music education field, the only other time in the relatively short existence of the ukulele that it was as popular, was in the early part of this century.

Again the mental images spring to mind, of canoes, quiet streams, "Joe Colleges" and "Sally Sophomores". But again, the popularity of the uke was short-lived, and undoubtedly, anyone who was "serious" about music, was not about the recognize it as anything more than a means of accompaniment for sing-songs. George Formby, Arthur Godfrey, and Roy Smeck saw the ukulele as much more, and did a great deal to ensure that it didn't pass out of existence altogether. And then, along came a man from Truro, Nova Scotia, to prove that the ukulele is indeed an instrument to be taken seriously.

Why has it suddenly risen from the lowest run of the musical instrument scale, (perhaps, second only to the kazoo!), to become recognized as a legitimate instrument?

There are a number of reasons.

1. Anyone can play the uke. Obviously, as with all things, some will be better than others, but "Tom Dooley" and "Swinging On A Star", are not beyond even the seemingly most untalented fingers.

2. There is no discrimination as to sex, age, strength, or physical make-up, as with other instruments. Indeed, as stated, anyone - male, female, young or old can play.

Technique and theory can be doled out at the same time as songs are being learned, and so one is immediately putting into practise the practical application of things learned...”

3. A far level of competency can be attained in a relatively short time. In a matter of weeks, one can actually play a real song, perhaps with only a few chords, but a recognizable song none the less. Thus determination to learn is sparked early, and generally maintained.

4. Technique and theory can be doled out at the same time as songs are being learned, and so one is immediately putting into practise the practical application of things learned.

5. It's portable! How many of us have the dedication, just to transport a double bass or a set of drums from point A to point B for a lesson? A uke can be managed quite nicely on a bus every day, with a lunch pail and a load of school books. It goes easily to parties, and one doesn't need an entire room to store it in. Pity the poor harpsichordist!

6. It's inexpensive. A ukulele can be had for under $10.00. So, with a case and a method book, the financial outlay to get oneself launched is minimal. On the other hand, Brazilian rosewood, mother-of-pearl inlay, customized ukes are not out of the realm of possibility, if that's what you want, and can afford. However, depending on one's means, the ukulele lies within reach of any economic level.

Note: While no credit is given to the author of the article, it is almost certain that it was penned by Ukulele Yes! editor Karen Lilly, whose "writing style supported the atmosphere of friendliness and fraternity that seemed to permeate Ukulele Yes! activities" (Wallace, W. (1989). A History of the Doane Ukulele Method 1961-1989. p. 48).

Seven Point Guide to Why You Should Play the Ukulele Apr 27, 2021
The Godfather of Canadian Ukulele: J. Chalmers Doane (Part One) Apr 21, 2021
Welcome to the Alternate Tuning Dimension Apr 13, 2021
Close