Ukulele Lowdown: Adding a bass to your uke group 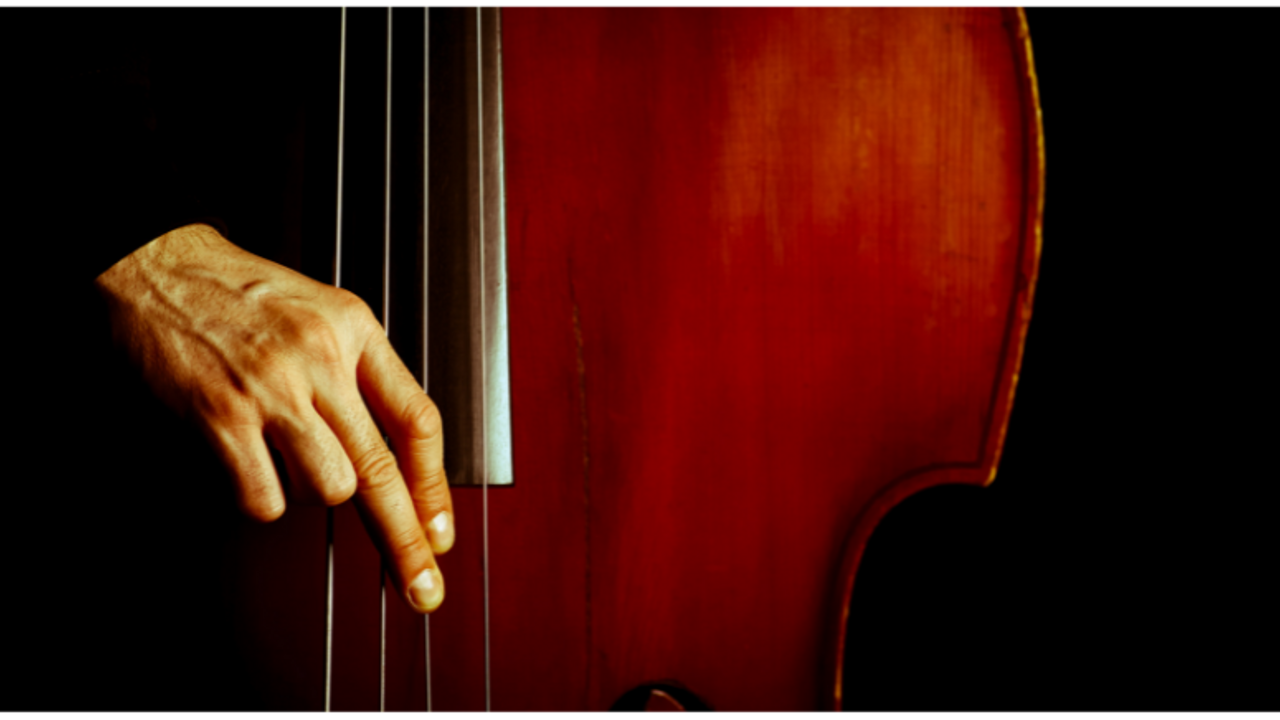 It ain't a party 'til the bass shows up! Uke/bass player Steve Boisen walks you through the essentials of adding bass to your group/jam including pointers on instrument selection and finding the right person for the job in this month's From the Vault throwback post from June 2011.

The case for bass: the more the merrier

Since starting my own ukulele group in 2009 I have been using the internet to check out many similar groups around the country for new ideas. One thing I’ve noticed is that most of the other groups seem to consist of only ukuleles as far as instrumentation. In some groups this is by design due to a strict “ukes only” policy, while in others it seems to have occurred naturally. The members of my ukulele group have always brought along additional instruments at our meetings which I encourage as long as they don’t overshadow the ukes. Guitars (acoustic, tenor, archtop and lap steel), harmonicas, autoharps, basses (acoustic and electric), ocarinas, kazoos and various percussion instruments have all made appearances alongside ukes of every shape and size.

The ukulele’s limited range of notes... prevents it from providing any semblance of a bass part.

Plays well with others

Perhaps I’m biased since it’s my primary instrument, but I find that the addition of a bass really enhances the sound of our uke jams and performances. One of the many things that distinguish the ukulele from the guitar is its limited range of notes. Although this is one of the elements that give the uke its distinctive sound, it also prevents it from providing any semblance of a bass part. Even on a baritone ukulele the lowest note in most chord shapes is seldom the root. This is why the ukulele and bass go to together so nicely. Their respective ranges insure that they never get in each others' way and the bass has the ability outline the ukulele’s chord progression by providing the root notes. There’s also something “right” about string instruments of different ranges playing together. Whether it’s a classical string quartet or a bluegrass band, there’s a natural blend that makes for an effective ensemble sound.

Another reason a bass makes a great addition to a uke group is its role as a timekeeper. It’s not uncommon to encounter ukulele players who find it challenging to play in strict time. These are often folks who are new to playing a musical instrument, but even experienced strummers can have this problem if they are not used to performing with other musicians. Adding or dropping a beat (or a measure) here and there is not a big deal when you are playing by yourself, but a room full of uke players doing this can spell disaster. Even the simplest tunes can become a confused mess which may frustrate the more experienced players and perhaps even the audience if you are performing for one.

A simple, solid bass part can do wonders in helping a group of ukuleles stay on course.

A simple, solid bass part can do wonders in helping a group of ukuleles stay on course. Even the simplest bass parts usually include “walkups” and “turnarounds” that indicate when it’s time to change to the next chord or start the song over again. You may not be familiar with these terms, but you’ve certainly heard a bass player using these techniques to guide an ensemble. The bass is also very effective in establishing the tempo and feel of a song as well as signifying when it’s about to end.

The usual suspects: upright vs. electric

One question you must consider when adding a bass to your group is exactly what instrument to include. I’ve personally found that the double bass (a.k.a. upright bass) is a great match as it’s an acoustic instrument and one that’s particularly well suited to the type of music that ukulele players tend to favor such as tin-pan alley, folk, country, swing, oldies and Hawaiian songs. Unfortunately, double bass players can be hard to come by and good ones tend to be in demand and pretty busy. Double basses are very big and a lot harder to move around than a ukulele (or five ukuleles for that matter) so even if you find a player in your area, you may not be able to entice them into hauling around the big fiddle just to play with a bunch of ukuleles. However, I’ve often thought that playing bass with a ukulele group is similar in some ways to playing with a bluegrass group, so if there are bluegrass players or jam sessions in your area you might have some luck asking around to see if there are any bass players who may be interested in joining you.

Electric bass guitars are of course much more common these days, as are the folks who play them. You may have a much easier time finding an electric bass player who would like to join you, especially a beginner or intermediate player who is looking for a low pressure playing experience and some fairly easy songs to play. If any of the members of your uke group play guitar (which is likely) they may also play some bass or even be willing to give it a try as the switch from guitar to bass is a fairly easy one. Many famous and successful electric bass players (including Sir Paul McCartney) started out as guitarists and were “drafted” into becoming bass players simply because one was needed at the time. This scenario has a long and noble history in pop music.

When adding an electric bass to a uke group it’s very important to keep the volume at an appropriate level and find a tone that is suitable. When I play electric bass I generally use flatwound strings and pluck them with my fingers rather than a pick to get a smooth, deep sound not unlike my upright bass. No matter what equipment or technique your bass player uses, the tone should compliment and support the other instruments and never overpower them or serve as a distraction to the overall group sound.

Other options: the acoustic bass guitar

Acoustic bass guitars have become quite popular in recent years and are widely available. These are essentially large acoustic guitars that are strung, tuned and played like an electric bass. They can be played without amplification and while they are not nearly as loud as the double bass, their acoustic volume may be sufficient for playing along with a small or medium sized group of ukulele players. In most cases these instruments have to be amplified for live performances and nearly all models include a built in pickup for this purpose.

Acoustic bass guitars also blend visually with ukes; the Ukulele Orchestra of Great Britain has always included one in their instrumentation, referring to it as a “bass ukulele”.

The Ukulele Orchestra of Great Britain's arrangement of the theme from The Good, The Bad and The Ugly features their "bass ukulele" (and a bass ukulele player with mean whistling chops!).

Nowadays there are actual bass ukuleles which are essentially baritone-sized ukes that have been modified so they can be strung with special synthetic strings that allow them to be tuned like a bass. Until recently these were only made on a custom basis by a few individual builders, but Kala has introduced a new production model using the same principals. It remains to be seen to what degree these instruments will catch on as they don’t produce enough sound for unamplified performance, but for someone like me who plays both ukulele and bass it’s an attractive concept. The portability is a big plus although it’s somewhat mitigated by the need to carry an amplifier.

**Note other brands have since created u-bass models, in some cases with steel strings, such as Ohana Music.

James Hill and Bakithi Kumalo (on U-Bass) jamming on a traditional Bulgarian melody.

A somewhat older invention is the Ashbory bass which was introduced in the 1980’s and is currently produced by Fender. This is a very small, solidbody electric bass with silicone strings, a fretless fingerboard and a piezo pickup system. The Ashbory bass is not much bigger that a ukulele and it seems to have made its way into several ukulele based performances for this reason. It’s compact size and uncanny ability to mimic the sound of an amplified double bass has helped it maintain a small but loyal following. However, the tiny fretless fingerboard and somewhat sticky silicone strings can be daunting at first. Even an experienced bassist will find that the Ashbory bass really takes some getting used to. I didn’t keep mine for very long, although I’ve entertained the thought of getting another one just for uke gatherings and travel.

I’ve also seen some ukulele groups that utilize the single string washtub or “tea chest” bass. While I can appreciate the fun in building and playing a homemade folk instrument, as a serious bassist I can’t recommend these as their generally random pitch will not go far in enhancing your ukulele group’s sound or reputation. The same can be said for the inexpensive upright basses made from a cardboard box that have appeared on the market in recent years.

There are a surprising number of stringed bass instruments that I haven’t mentioned including ethnic instruments like the contrabass balalaika and the berda (bass tambura) and domestic novelties from the early 20th century like the mandobass and the Regal Bassoguitar, but I’ve covered the main instruments available today.

It's Not the Bass, It's You

More important than the instrument perhaps is the style of the player. For the most part simple and supportive bass lines work best, although an accomplished player will find opportunities to add a bit of spice to a performance and I’m not unaccustomed to playing a bass solo while backed by the sound of several softly strummed ukuleles. If you are playing any well known pop or rock tunes your bass player may find that they have to alter the original bass part to accommodate a different key, feel or arrangement. My uke group had a session in which we played only songs by the Beatles and in almost every case I had to alter the original bass part to some degree.

If you do decide to add a bass player to your group, don’t be surprised if they start playing ukulele too. I’ve discovered that there are a significant number of bass players who also play the uke. Lyle Ritz has had a very successful career playing both instruments and even the aforementioned Paul McCartney has been strumming one in concert lately as a tribute to his uke-loving friend and former band mate George Harrison. Perhaps it’s a propensity for four strings, but even if they never succumb to the charms of the ukulele I’m sure you’ll come to appreciate your bass player’s role in supporting your ukulele group’s performances.

This "From the Vault" post comes from the June 2011 issue of Ukulele Yes! magazine. Steve Boisen is one half of The Barnkickers and producer of the ukulele compilation CD Square Pegs & Round Holes, a fundraising project in support of the American Asperger's Association. He is also a freelance bass player and founder of the Tampa Bay Ukulele Society. You can find him at his Instagram account: www.instagram.com/bassfiddlesteve